International investors, with the British leading the way, acquired 48.000 properties in Spain in the last year

The price of real estate continues its increase and rises at a rate of 6.9%
During the last year, and taking advantage of the strong correction registered in the real estate sector since the bubble burst, foreigners bought more properties in Spain than ever before. Specifically, international investors acquired about 4.,000 homes, representing an increase of more than 13%, and also more than 13% of total sales.

This is shown by the Housing Price Index of Repeated Sales, developed by the Property Registrars, which also shows that citizens of the United Kingdom are by far the the foreigners that most houses bought: 21% of the total. This means that some 10.000 homes were purchased by investors or tourists of this nationality at a time when the relationship of the United Kingdom with the European Union (EU) is in doubt, something that could certainly be of great relevance since an event like the Brexit would greatly hamper commercial and sales relations. Far from the British are the French, German or Swedish, who hoarded between 6% and 7% of purchases. Chinese citizens, who are increasingly looking for more investments in Spain, represent just over 4% of the total purchases. 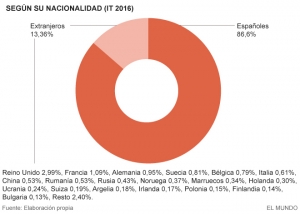 All these investments, added to the ones made by the nationals, are basic to explain the strong rebound that the price of housing is experiencing. “The first quarter of 2016 closed with a year-on-year increase of 6.9%, slightly above that presented at the end of 2015”, explained in this study which includes data for the first quarter of the year and Adds that the “year-on-year rate [of rising prices] is consolidating above 6% for the third consecutive quarter”.

The strong increase is a consequence, among other aspects, of the almost 100.000 homes that were sold in Spain during the first quarter of the year alone. “This number of quarterly sales is the highest in the last 12 quarters (three years) and the second highest in the last 20 quarters”, registrars say, and overpass 18% more than the last three months of the past year.
“This improvement in property purchases is generalized territorially, with 16 Autonomous Communities with positive inter-quarter rates,” continues the report, which also details that “the highest number of sales and purchases has been in Andalusia, Catalonia, Community of Madrid and Valencian Community “.

With this last strong push, also the number of properties sold in Spain during the last 12 months has marked a milestone. “Interannual results recorded 363.431 housing sales, increasing by 8.893 from the fourth quarter of 2015, which is the highest year-on-year result of the last 17 quarters,” the report said.

In short, figures & data show the recovery of a sector that has been and is becoming key in economic growth, but still carries some problems. One of them, according to the document, is the sale of new properties, which in interannual terms “has registered a new historical low with 71.703 sales.”